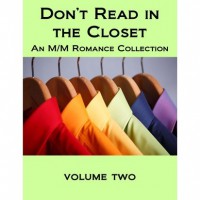 Before this book, I hadn't gone too much into the M/M area. I might have read some stories here and there, and didn't bother to put them up on Goodreads, for they were just excerpts. Some of them were really badly written and I was skeptical about reading even more of this genre.

Though I gave it 3 stars, that doesn't mean I found it bad. It's just that 3 stars is the overall rating, cumulated from all the stories inside. Different authors were given a picture and they had to come up with a story as to how that picture might have happened, what was behind the character's dreamy eyes, or why did he seem to be in pain, or other as such. Some wrote 4,000 words stories, some went to 30,000. It was their decision to make.

I will admit that some of the stories I didn't like at all. Being no quite into the subject from the beginning, I was a very harsh judge, and some didn't seem to be enough. Others I really really liked, and I kept some author names to follow them on the Internet and see what they're up to.

Why I read this book in the first place? Partly because I wanted to broaden my limits. I wanted to open up my mind, and see if I like this kind of writing or not. After finishing, I can't say I'll never read M/M again, because it is entertaining, and as in any genre, you can always find something really well written.

Another reason for which I went on GR and typed gay stories was that I saw this video on the Internet. It's called "What if Heterophobia were real?". It's based on true stories, but with a twist. It presents this world were instead of gays being forced to hide themselves and blamed by society, this happened to heterosexuals. It's just a 20 minute video, and I really recommend people to go search for it and watch it. It's pretty sad, and as it impressed me, it may touch others also.

I think I'll read the first and next volume also. I just started with this one because this I found in the beginning.
Tweet