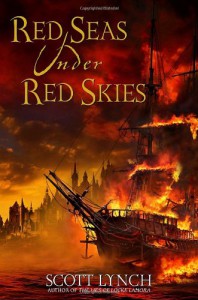 did I miss something between the first and the second book? was there another installment? how did this get so much better on such short notice?!

scratch out what I said in my review for the first installment, that it resembles Kvothe of "The Name of The Wind". That doesn't apply here! Locke develops into a completely different character and takes on the world with so versatile means that you begin questioning Lynch's plannification for the series! it really gets so, so much better and by now, you're so deeply attached to the duo (Jean and Locke) that you just can't give up on them.

as always, in a middle-series installment review, here's some quotes that I liked:

"Well,"said Jean, "I shall be sure to criticize your reading habits, Master Kosta, should I ever see you develop any."

"History and biography, mostly what Chains prescribed for you."

"What could possibly be wrong with those subjects?"

"As for history, we are living in its ruins. And as for biographies, we are living with the consequences of all the decisions ever made in them. I tend not to read them for pleasure. It's not unlike carefully scrutinizing the map when one has already reached the destination."

"But romances aren't real, and surely never were. Doesn't that take away some of the savor?"

"What an interesting choice of words. `Not real, and never were`. Could there be any more appropriate literature for men of our profession? Why are you always so averse to fiction, when we've made it our meal ticket?"

"I live in the real world", said Locke, "and my methods are of the real world. They are, just as you say, a profession. A practicality, not some romantic whim."

Jean set the book down before him and tapped its cover. "This is where we're headed, Thorn - or at least you are. Look for us in history books and you'll find us in the margins. Look for us in legends, and you might just find us celebrated."

dialogues like this remind me why I like a particular type of high-fantasy and why I enjoy a good fantasy writer when I get my hands on one, because they build their world on top of these type of moments.

+ before I forget to mention this, this book is mostly based on Locke and Jean's travel at sea, where they were on a ship and sailing along with a band of pirates; i'm not an expert on sea navigation or even on a ship's parts, but for a reader that pays a great deal of attention to detail working and world setting, it all seemed very authentic and thoroughly researched when it came to techinal terms or the mechanincs of navigation.

and then I love the cheecky parts:

"Forgive me madam, but I must know whom I'm announcing." She stepped safely onto the dock, and he released his grip on her hand. To his surprise, she didn't release hers, and in one smooth motion she was up against him with the menacing weight of a blackened-steel dagger touching the crook of his thigh. He gasped.

"Heavily armed pirates, party of ninety-eight," the woman said. "Screan or fight back and you're going to be one surprised eunuch."

and then, the perfect chemistry between Jean and Locke, which usually ends up in the whole dialogue being a ball game where they keep throwing words at one another until someone stops them (for those that have to understand this part of dialogue from the stranger point of view because they haven't read the book, just imagine Jean as a big, broad-shouldered, muscular guy and Locke as a scrawny, little fizzle):

"And I won't let you come with. What do you think you can do, fight me?"

"Shut up, the pair of you," said Zamira. "Gods. Just this morning, Jerome, your friend here tried to convince me to let him do exactly what you're planning now."

"What?" Jean glared at Locke and ground his teeth together. "You miserable little sneak, how could you - "

"What? How dare I contemplate what you were going to do to me? You self-righteous strutting cock, I'll - "

" - I'll throw myself at you, and you'll beat the shit out of me,"said Locke. "And then you'll feel awful! How about that, huh?"

i need the next book! now!