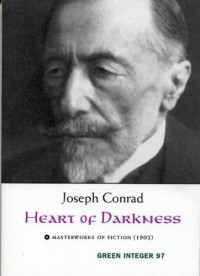 Of course I had heard about this book before I read it. Of course I knew of Joseph Conrad. But, as always, knowing about them doesn't prepare you for reading the works they brought into our world. So happened here.

I somehow expected him to be a genius writer who wasn't understood in his time. I expected a lenghtier book, but I knew sometimes good things don't come in big packages and I could find it amazing even if it's short.

I don't know if it was my attitude, or this book actually starts off like a bear wakes up after the winter, but it was lazy and ir kind of bored me through the first pages. Then I realised there was a purpose to all of it, alas, because he was just describing the surroundings and situation and that was not how the actual story went.

It treats on some really touchy slavery issues. Black slavery, that is, in the jungles of Africa, where whites would use every ace they had up their sleeve to exploit both resources and humans. Joseph Conrad follows the trail of one man who travels along the Congo river, and the other characters he meets on the way, how he interacts with them and why do they do what they do.

Though I didn't find it as amazing as I thought I would, it was still a nice read and I hope I'll be able to find some more Joseph Conrad books.
Tweet