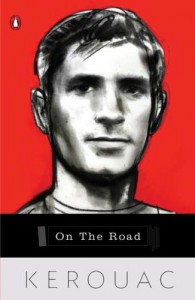 This Dean Moriarty guy? I loathed him. The way he used everyone around him and was excused for it because he was an "angel" and would bind people together. The way he used Sal, and then left him in different places throughout the book; and Sal would go back to him.

They both wanted to slow time so their lives would go on like that forever; to be careless and mostly homeless, to roam the roads of America until their last days so they could have what to tell to others. Beautiful, I get it, but not a good idea.

I'll probably have to read this again sometime, in order to get a better insight on the story and the characters, because as they put it, this is the basis of the "Beat Generation". And I figure: if it's a basis for something, it has to have something extremely special about it, right? I hope I'll be able to find it.

In the end, I don't really want to review this seriously, because I don't have many good things to say about it (at least not today, maybe in the future); of course, I'd like to come back to it someday and say Ana, you were so stupid! this is a great book!. It ain't that day yet.
Tweet