The Mist (Previously Published as a Novella in 'Skeleton Crew') 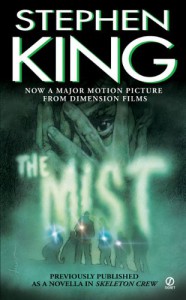 Way to go for Stephen King, one more time.

I'm pretty sure somewhere along the I-love-Stephen-King-Road something changed and I wasn't able to look at his short stories or at his novellas with the same eyes I look at his longest works. For example: I loved IT (which, seriously, you have to admit it's long enough to last for about.. a week of reading.), but I found myself really questioning how MUCH I liked his longer stories when I read The Little Sisters of Eluria , which is a prequel to the Dark Tower series (the 0.5 kind of prequel you find on GR), and which impressed me more than some other works of his. Despite it being like 100 pages long and not at all complicated.

I think sometimes it just goes down to personal choices and I must say I like his shorter works compared to his longer ones, because he is just sooooo gooood at portraying a character in a short span of time. He gives exacty the details you need and clearly doesn't linger on unwanted informations, and you get a detailed bigger picture of who the man is.

The Mist is centrated around David, a father and a husband who lives in a house built next to a lake, close to a millitary camp (or something about the government, didn't get that quite right), that he calls "The Arrowhead Project". One day, after a massive storm, a thick, white and non-reflexive mist starts advancing towards his house from the other part of the lake. He doesn't pay attention and goes in the town with his son, Billy, whom he takes to a store. Long story short, they remain trapped there, and they realise something is lurking outside, in the mist, something evil and blood-thirsty.

Seriously, read it. It's short and good. It's Stephen King.