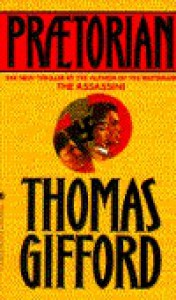 There were times I thought I would put this book down and not open it again, but some little voice deep down in my head kept saying "do it, do it, pick it up, continue it!!". And of course I had to obey.

I had a hard time deciding if I'm going to give it three or four stars, but finally it came down to personal choosing and I went with three. The explanation for this is that even though it is an entertaining story and it kinda keeps you on your toes, waiting for the next thing, it has the tendency.. to just be too long! For me it's kind of a sacrilege to say that because I find that the longer the story the more I come to like it, but in this case it was the opposite.

A good writer, Thomas Gifford has the sense of mesure and gives one info at a time, making you long for the next bit, and it gives the feeling of a book that has a large amount of work put in it.
Tweet