Let the Right One in 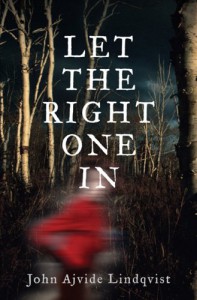 There are books out there that I like from the first page, and there are books for which I develop feelings later on, due to various reasons like character developing or, at it was the case for this one, the plot.

I haven't found this book as creepy as I heard it should be. Yes, it has its moments, where the reader bundles up under the blanket with the book and tries to stop his imagination from working see me three hours ago when Hakan was in the basement with Tommy too much, and cannot succeed. But I've read things creepier than this. The story oozes, though, a feeling of uneasiness, as after I finished it my hallway suddenly seemed filled with more shadows than usual.

The story is not so much special as it is written with an open and serious mind. Explanation: the book seems to have been written by a man who didn't take vampires for shiny sex toys and who genuinely wanted to create a work that incorporated them without smearing it with crap. And to scare the life out of us. Good job, Lindqvist! My man.

Oskar, a twelve year old boy that is severely bullied at school meets twelve year old Eli. Eli is a two hundred and twenty year old vampire trapped in the body of a.. well here you got me. First you get the impression that Eli is a she, then you get confused because Eli says she he!! is a boy, then he takes off his clothes and whattayaknow, he doesn't posses the right jewels.. actually he doesn't posses any kind of jewels because his was cut off in the process of becoming a vampire

In the end, the story involves some haunting, blood, guts, rape, more blood and other vampires.

There was a passage in this book that I liked a lot, an awfull lot. I don't know why, it's nothing special, but to me it seems so well written that it gives me the exact feelings that man must have been going through, without having to think about it. Here it is :

"Excuse me. Walked? She wasn't running?"

The man put two swooty hands up to his face, sobbing. "