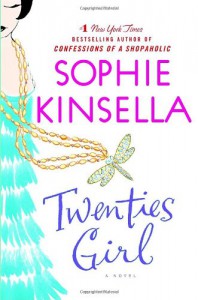 Even though I like some of her other books, I think this one was kind of .. awfull. I'm not normally one to say bad things about a writer that tries to be funny, but Sophie Kinsella, in "Twenties Girl", combined two things that for her just on't work out : a ghost and sense of humour. I have already noticed that Kinsella's books ten to have the same style, same kind of characters an same kind of jokes an humour, but in this particular book, it just doesn't bond right with the characters.
I hated the fact that the ghost was unbelievably obnoxious, but then again, I suppose I had to be annoye, that was the purpose.. Anyway, I had to give it up after some 200 pages.. Just doesn't do it for me.
Tweet