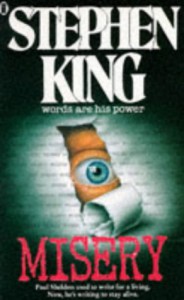 Can I just say I don't think and I just don't believe that King ever wrote something bad? It is impossible!
Misery is, I think, a good book from more than one point of view : it's well written, it has an amazing subject, the characters are well described and they are put in situations in order to bring out the best or the worst in them, and of course, it's terrifying to the bone.
which is a really good thing, considering the subject!
I would reccomend it to anyone who wants a lot to think about when they shut the light, at night!
Tweet